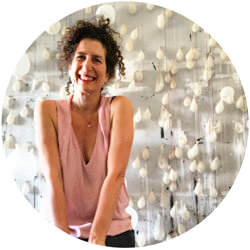 Cathy Abraham was born in 1968 in Cape Town, South Africa where she currently lives and works. She specialised in process-based art at the Michaelis School of Fine Arts, University of Cape Town (UCT), where she graduated with a Post Graduate Diploma (PGDIP) in 2016 and a Master’s in Fine Art with Distinction in 2018. Abraham’s creative work brings together seemingly disparate entities through participation and a ritual based practice. She uses mediums that reflect the subject matter which include film, mixed media, installation and participation as well as painting and sculpture.

Most recently in 2018, Abraham’s MFA culminated in a solo exhibition titled, A Deeper Kind of Nothing.

Abraham’s first solo show, Naked, was held at the Joao Ferreira Gallery in Cape Town, in 2008. Notably, amongst other solo exhibitions Abraham presented a solo exhibition at the South African Jewish Museum in Cape Town in 2013, entitled Undying Entanglement, comprised of installation, film and works on paper.

From 1991 – 1994 Abraham worked at Cygnet Manufacturing Company, a swimwear factory in Epping, Cape Town, where she designed fabric and swimwear as well as marketing and catalogue styling. She ran the Balu children’s clothing shops at the V&A Waterfront and Cavendish Square from 1996 – 2000. From 2003 – 2008 she taught Process-based art to adults and teenagers as a way to enlarge their portfolios, leading workshops for life-drawing, sculpture and mixed media through guided meditation.

Abraham works systematically to unlock surface meaning in the search for a deeper understanding of the purpose of the everyday. Constantly questioning the boundaries between reality, fantasy and illusion in comparison with existence and death, she uses materials in quirky and playful ways.

Abraham’s practice is grounded in her belief in the links between art and science; spiritual practice and reincarnation; and the search for ways of shifting perspectives. Her work challenges notions of time and space; as well as expectation versus reality—collapsing past, present and future.